The Circuit Courthouse is located in Historic Downtown Fincastle at 1 Main St. It was built in 1848 and was rebuilt in 1975 after being destroyed by fire. 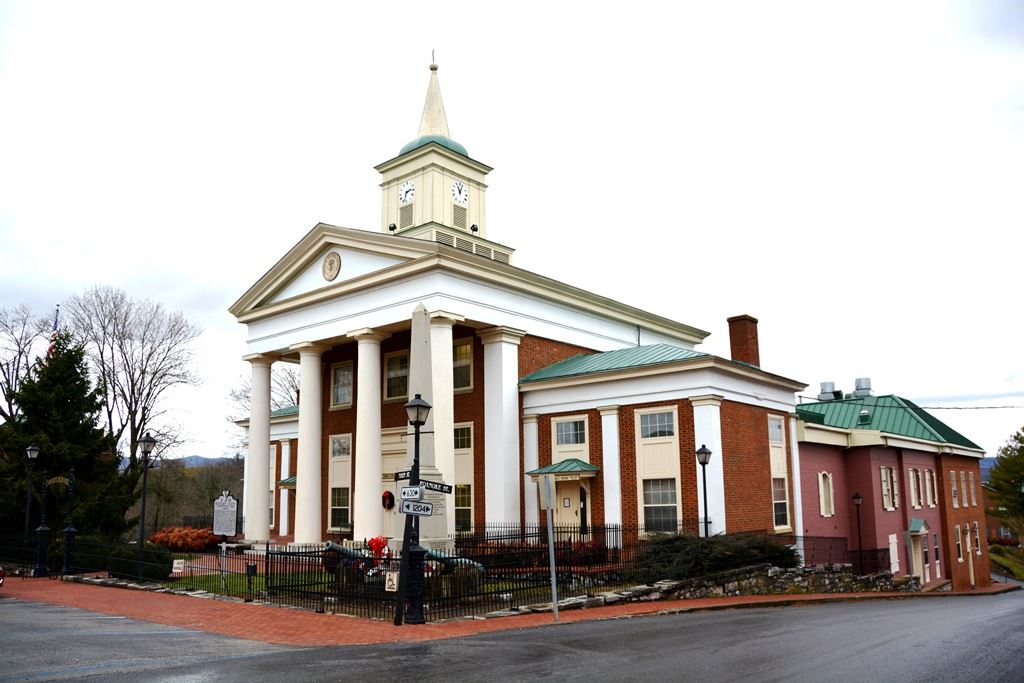 Over the course of its near 45-year lifespan, the building has become increasingly unsuitable for workers and visitors.  The building does not meet current State courthouse standards or federal standards for persons with disabilities.  A 2019 facility assessment conducted by Spectrum Design of Roanoke documented extensive problems including water leaks from the foundation, walls, and roofs, failing mechanical systems, and inadequate security.  Growth in court caseloads and other services provided to the County’s growing population have resulted in severe overcrowding in the current courthouse.

The proposed courthouse concept calls for a new facility that retains the appearance of the current courthouse.  It duplicates the existing red brick façade with white-columned portico, the building’s green raised-seam metal roof, and its signature clock spire.

The estimated cost of the project is approximately $25 million.  An independent financial analysis commissioned by the County indicates that the County can afford the new courthouse project without raising tax rates.  The analysis was conducted by VACO/VML Finance of Richmond.

“The committee immediately had two goals for the courthouse,” said Architectural Partners Project Manager Jim Vernon.  “Meet the long-term needs of the court system and retain the look of the current courthouse.  The recommended concept meets both of those goals.  It, also, represents the most efficient and cost-effective solution among numerous alternatives,” he added.

Another goal of the committee was to enhance the vitality of the Town of Fincastle.  The courthouse green and generous parking are intended to support public gatherings and events in the heart of Fincastle, and to improve access to surrounding businesses.  Relocating the museum building is another element that has generated much continuing discussion.

Architectural Partners of Lynchburg is preparing all design, construction, bid plans and documents for the relocation of the hotel/law office building currently housing the Botetourt County Historical Society and Museum and the monuments located in front of the Circuit Courthouse.  Renovation is also taking place on a portion of the Public Safety Building to temporarily house the Circuit Court during demolition of the current and construction of a new Circuit Courthouse. Renovation is also occurring at the Old District Courthouse to temporarily house the Clerk of Court Office during construction.

Site improvements including the demolition of the Fincastle Community Center Building and the former Botetourt County Public Works Building along with the construction of parking and a “Courthouse Green” are also moving forward.

There will be a lot of temporary relocations during the construction project. Right now, the focus is on the relocation of the hotel/law office and monuments first, along with renovation of a portion of the General District Court Building and an unfinished basement area of the Public Safety Building.  When that renovation work is complete, the Circuit Court will move to the Public Safety Building and the Clerk’s office will move to the General District Court Building. This is all scheduled to take place in 2022/early 2023.  Demolition and construction of the circuit courthouse will start in 2023 and conclude in early 2025, barring unexpected disruptions or delays.  All work is scheduled to be completed and the new circuit courthouse occupied by the spring of 2025. We will keep the community up to date as this project unfolds.